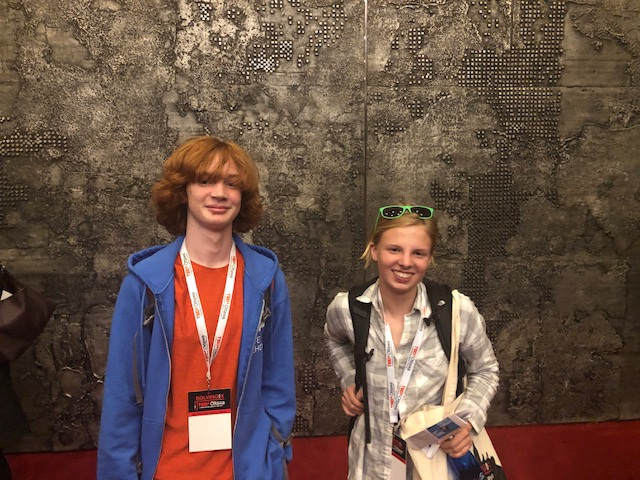 “Grace and Will at the conference”

The first speaker to take the stage was co-founder of Second Cup and Officer of the Order of Canada Frank O’Dea. He started off his speech by talking about his youth and how he used to be homeless in Toronto. He said that it was a rough and sometimes violent existence. He shared about his drinking problems when he was homeless, saying that he would panhandle with his buddies trying to get enough for a bottle of wine and talking about what they would do tomorrow, “Tomorrow I’ll get a job, Tomorrow I’ll quit drinking, Tomorrow I’ll call my family”
then having to choose whether or not to sleep inside or out. He finally realized that he had two choices, “Die or change.” That’s when he thought about an ad he heard in a shop that was about alcoholism that kept repeating a phone number. He went to the nearest payphone and just stuck out his hand and as he stood there a passerby dropped a dime into his hand. He made the call and never had a drink again. He said it was hard trying to get a job with no address or phone number but eventually he got a small sales job. Then that job lead to a better one which lead to a better one until he was off the streets. Then he met his business partner and started Second Cup. After he was on his feet, he started giving back to the world by co-founding Street Kids International, an organization developed to help homeless children in third world countries and the Landmine Foundation, an organization that raises funds for the dismantling of minefields around the world. He never forgot where he started and is an inspiration to Canadians everywhere.

Mathieu Fleury’s speech was about the key to solving homelessness. His message was “Housing first works.”. He talked about how we needed new solutions to tackle the homelessness problem instead of having “new money on old models.”. He talked about how there isn’t much renting in Ottawa compared to other cities like it such as Montreal where 63% of people rent compared to Ottawa’s <35%. He said that one of the problems was low vacancy, in 2016, the rental vacancy for Ottawa was 1.6%. He finished by saying that we need to give these people a place that feels like home for them, give them a key.

The fourth speaker was Marcus G. Miller or Marcus the Artyst and his speech was all about finding beauty in math and music. Marcus has a math degree from Harvard and has played saxophone on The Late Show With Steven Colbert and in the Obama White House. The bulk of his speech was focused on speaking about infinities. It was a bit confusing but he always came back to explain it in a simplified way after some contemplative music. His punchline came after he had explained about infinite infinities each one larger than the last. Once he caught us all up and we understood he played the contemplative tune once more as we experience that moment of beauty after learning something new.


Dan Hendry started his speech by talking about what you can do when you’re unhappy: leave, accept or change. Well, when Dan was unhappy, he decided to change. He wanted to change the culture and the stigma around public transit. He noticed that there was a negative connotation to riding the bus and he wanted to change that for a couple reasons. Number one was to improve sustainability in cities and number two was to help people get around and not feel judged. What he’s been doing is going around to many different schools and showing students how to ride the bus because, “We don’t know what we don’t know and we won’t know if nobody shows us.” So he’s teaching these kids how to ride public transit so they won’t feel intimidated or confused. Another of his initiatives is to get kids in high school to ride for free and to have more schools use public transport for field trips.

The last but certainly not least speaker was the boisterous Guy Laflamme. He certainly lived up to his name “Laflamme” as when he was presenting he brought so much energy metaphorically and literally with his pyrotechnic displays. His talk was about “angel and devil” decisions. He explained that the “angel” decisions were the low risk but low reward options when doing anything but the “devil” decisions on the other hand were the high risk and high reward decisions. He discussed how he had made decisions while he was the executive director of Ottawa 2017. He talked about the lessons he learned from planning La Machine, Redbull Crashed Ice and Kontinuum. His main takeaways that he shared were that you need a raison d’être beyond money and numbers and you have to have the guts to say no in a respectful way.


By: Will and Grace (and no, not the TV show)
Grace Hill learner writing Shauna wasn't invited TEDx VIP Will
Location: 1 Elgin St, Ottawa, ON K1P 5W1, Canada