At Red Pine Camp, we each contributed at meal times. Some learners set tables and some cleaned the dishes. At RPC, washing the dishes is called slopping. The “sloppers” wear rain boots and aprons because you can get wet. The staff really appreciated our help in the kitchen. 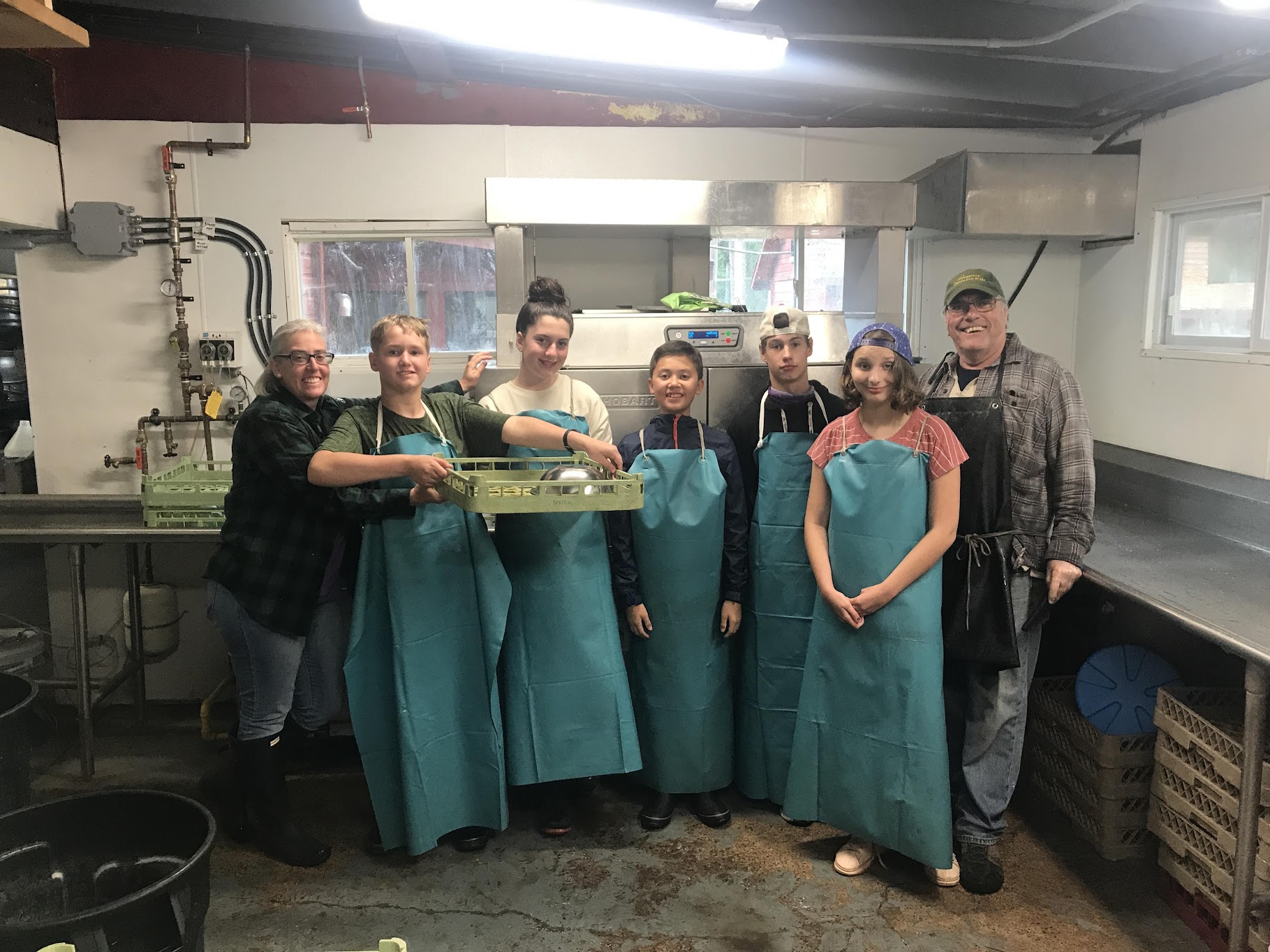 Something that is always a highlight  when we go to Red Pine Camp is the amazing waterfront and beautiful Golden Lake. In the beginning we were all worried that it was going to be rainy and the water was going to be cold. Boy, were we wrong! When we got there the weather was sunny and a crisp 19 degrees. The first afternoon we were there we had independent choice time, practically everyone wanted to go swimming, boating or just hang out by the water.  We made our way down to the waterfront and immediately jumped into the water! It was very refreshing and crisp (in other words really really cold). After a few jumps in and out, the water seemed to warm up. Some learners took to the kayaks and paddleboards and decided to go for a paddle to Ace’s Point (A rock about a 15 minute paddle away). That day was by far the nicest day to be down by the water so that was the only day that we had the opportunity to take the boats out  on the water. It was also good that we had the chance to go out on Monday because they were closing the boats up for the season. The next day it was much cooler and the water was colder but that didn't stop a small group of learners from going swimming! This continues to be one of the highlights of RPC each year!! 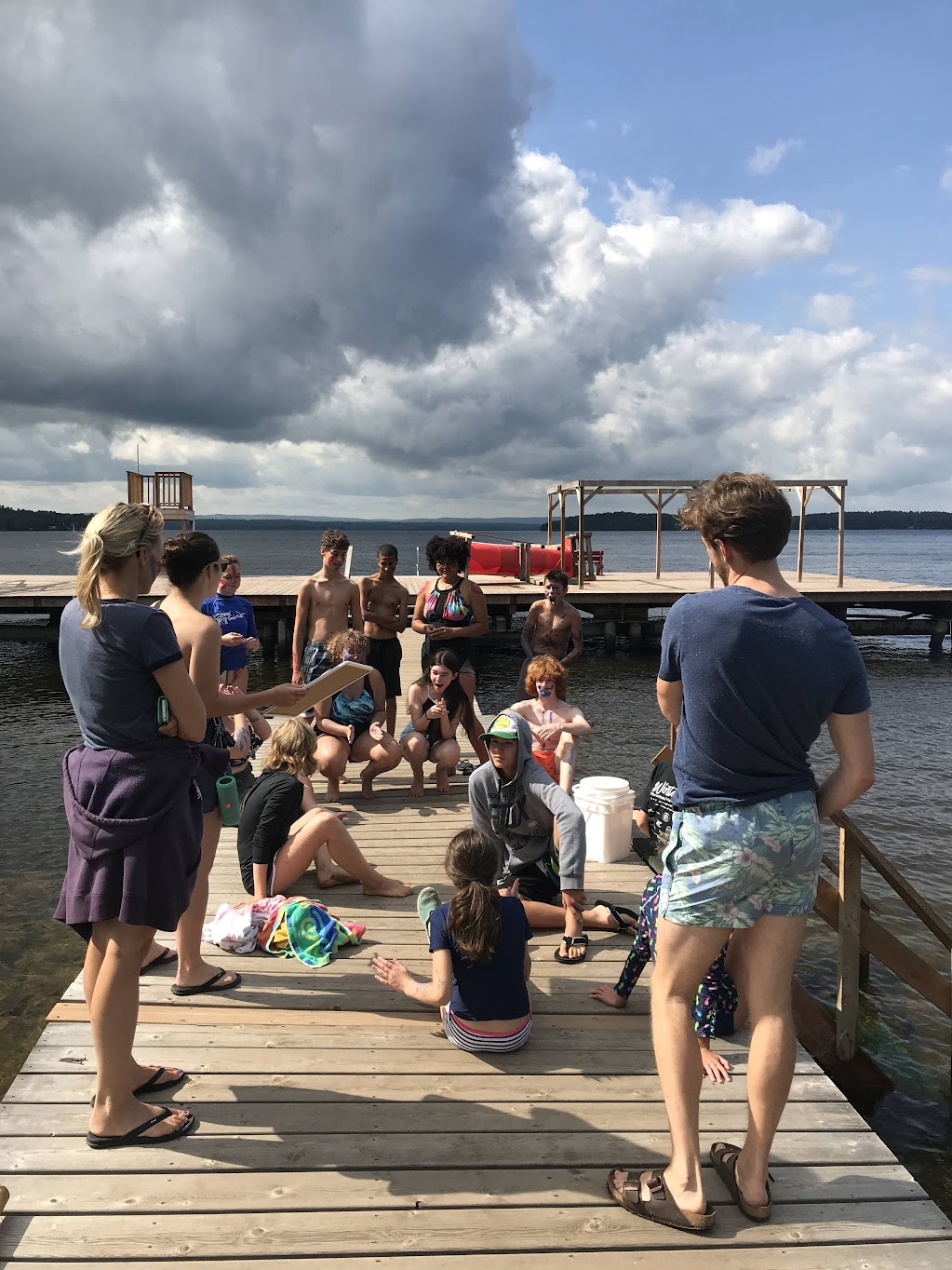 While we were at Red Pine Camp we had our version of a regatta; instead of rowing
we had a series of water games. We were split into two teams. Our first task was to come up with team names (The Poison Apples and The Blue Sky Barbarians) after choosing names, we were to paint our faces in a war-like way. Some of the designs were pretty crazy! After we painted ourselves we came up with a team cheer to the tune of a Disney song. After we were scored on all of that, we went to the Waterfront for our first challenge. We had to make the best sand castle in 8 minutes. Our next challenge was one where three people from each team had to get into the water and look for rocks that had been painted red, and after that we had a swimming race. Then, three learners from each team were chosen to direct and perform synchronized swimming routines. Then we played a game of Watermelon Ball with a real watermelon that had been covered in vaseline, and the last challenge was jumping off the docks and making the smallest, biggest, and fanciest jump.  Normally we don’t have competitions at Blue Sky but we wanted to see what it would look like if we did, and I think we did a pretty good job of cheering each other on even if we were not on that team.

On the first day of Red Pine, we played Ga-Ga Ball. Ga-Ga Ball is where you have an octagon full of humans and someone throws a ball at the ground and yells “GA-GA-BALL” and after that people hit the ball with their fists.

We played a game called OWL. that is where a person stands in one spot and people get 20 sec to hide and the “Owl” has to try to see people that hid.

We also played ManHunt. ManHunt is like tag but when you tag someone they are it with you.

The Quiet Year by Kiara 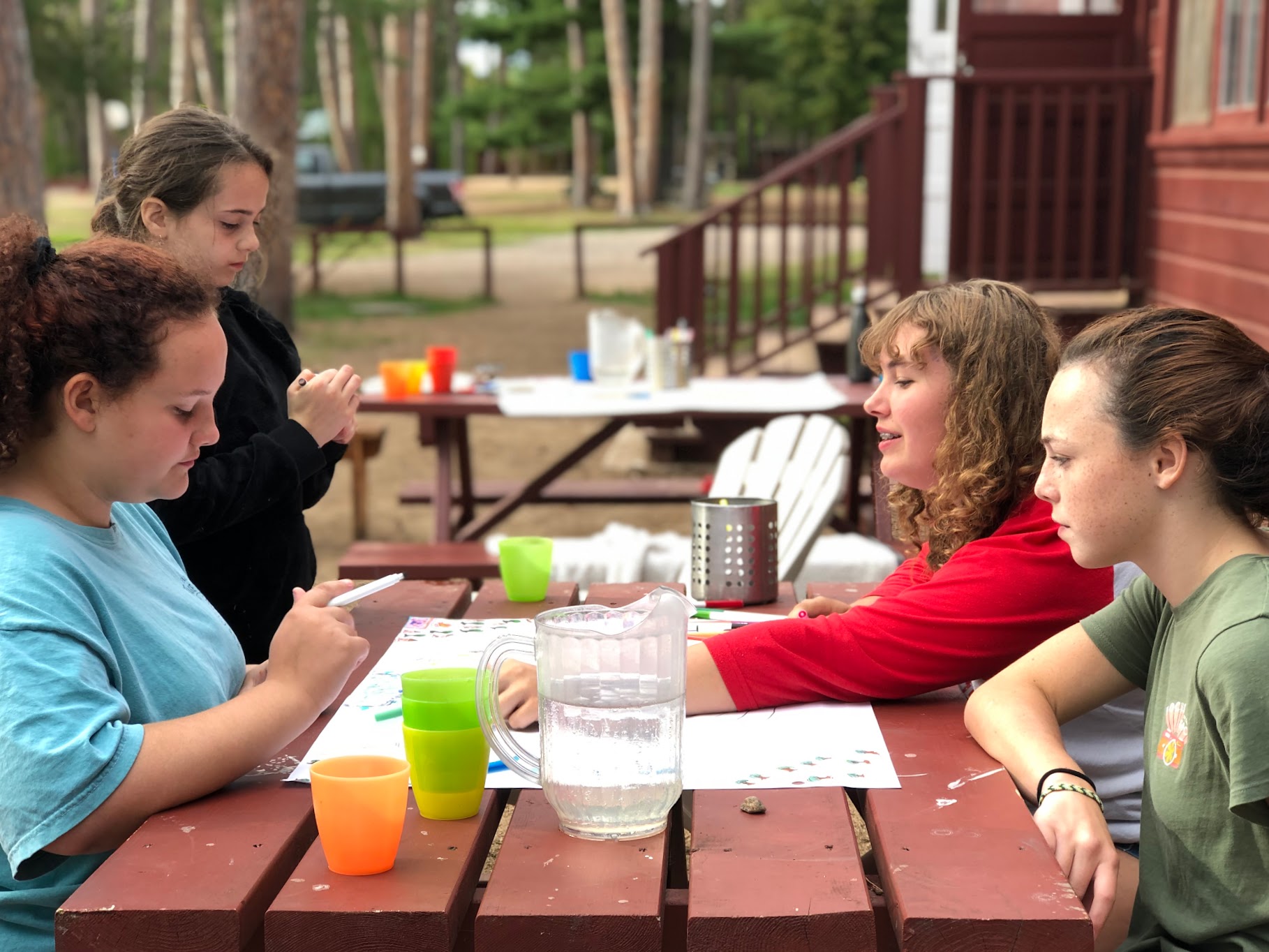 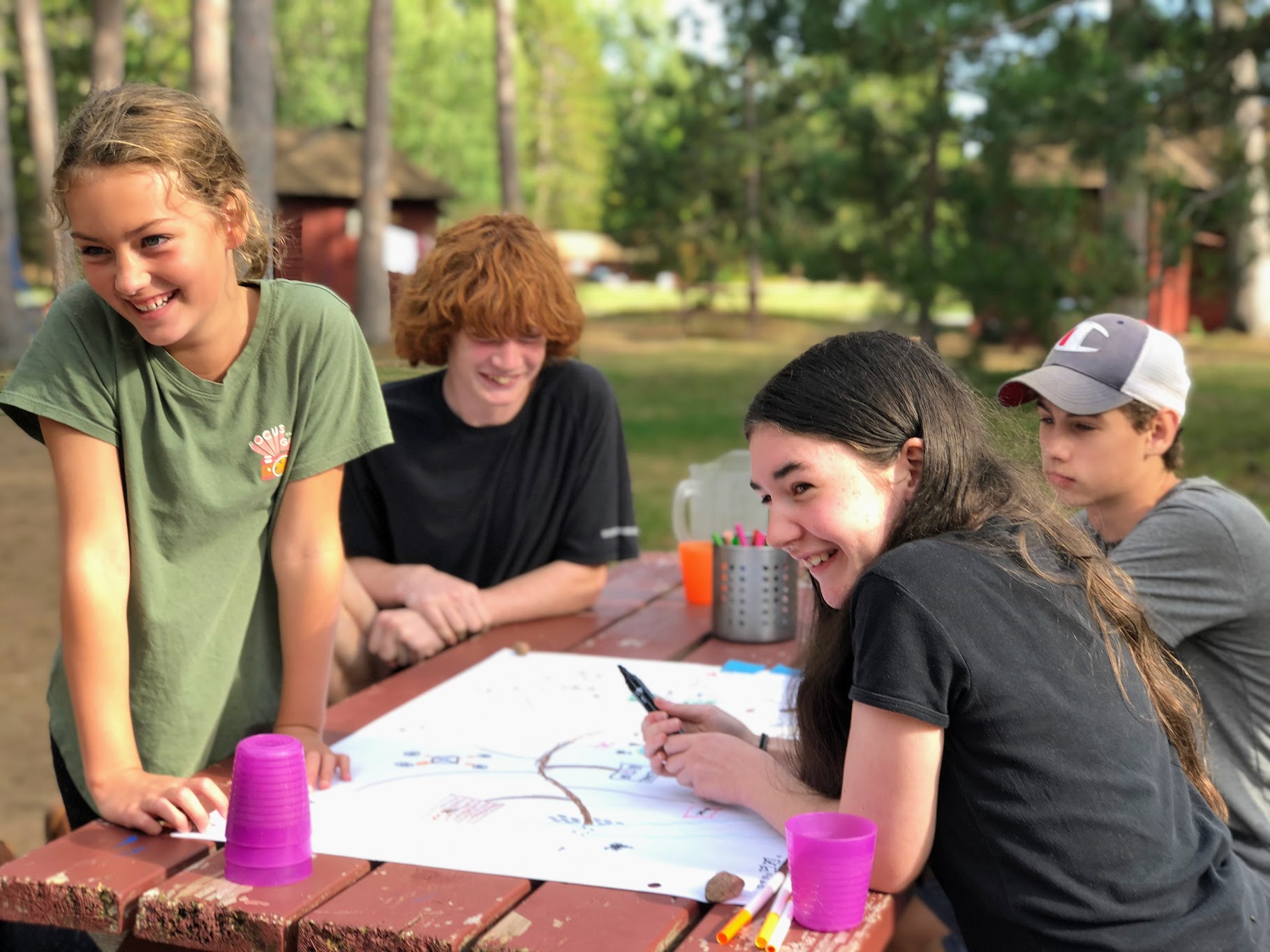 On our last full day at Red Pine, we played a game titled ‘The Quiet Year’ it was a game where we pulled cards and would create a community based on the cards we pulled. It was sort of based off of ‘yes ands,’ because once someone said something, it was set in stone. We choose four resources at the beginning of the game, and they could be as silly or serious as we wanted. The resources we made up ranged from water and lightning, to bald people and elderly raccoons. We played in three groups of four, and Shauna facilitated it. The game worked in seasons and weeks, where each week a card was drawn, and the card that was drawn decided what happened that week. The three groups started off separate, but eventually Shauna introduced rips in the space time continuum, and the groups got to interact and steal resources from each other. It turned out that making bald people a resource was a bad idea, for the group that I was in had only bald people as our residents- all except for one. Our RIVAL group, the Cloaked Children, stole all of them, and we had to go on an epic quest to rescue our people. All in all, the quiet year was a really fun game, and many of us wish to continue to develop our stories. 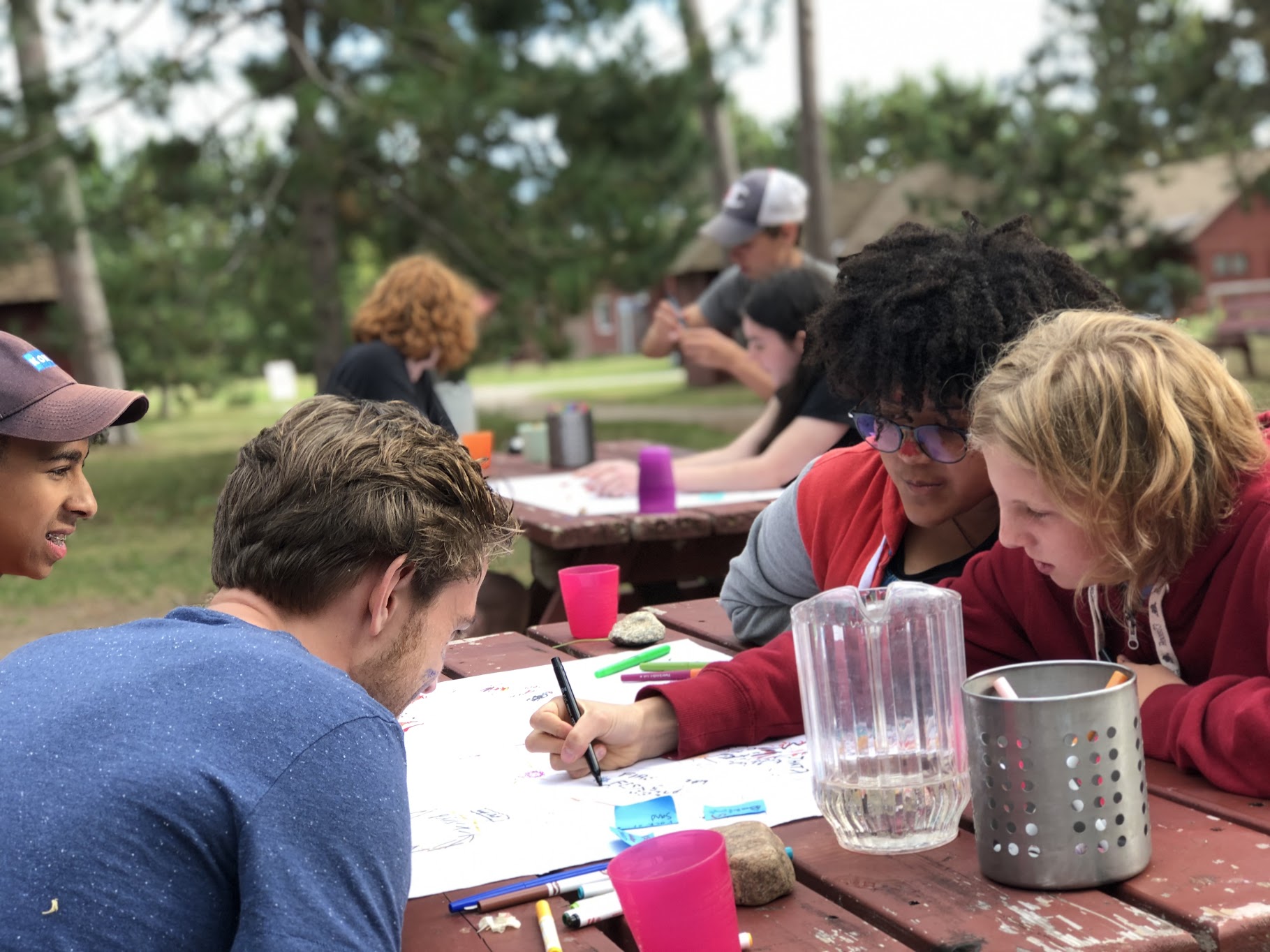 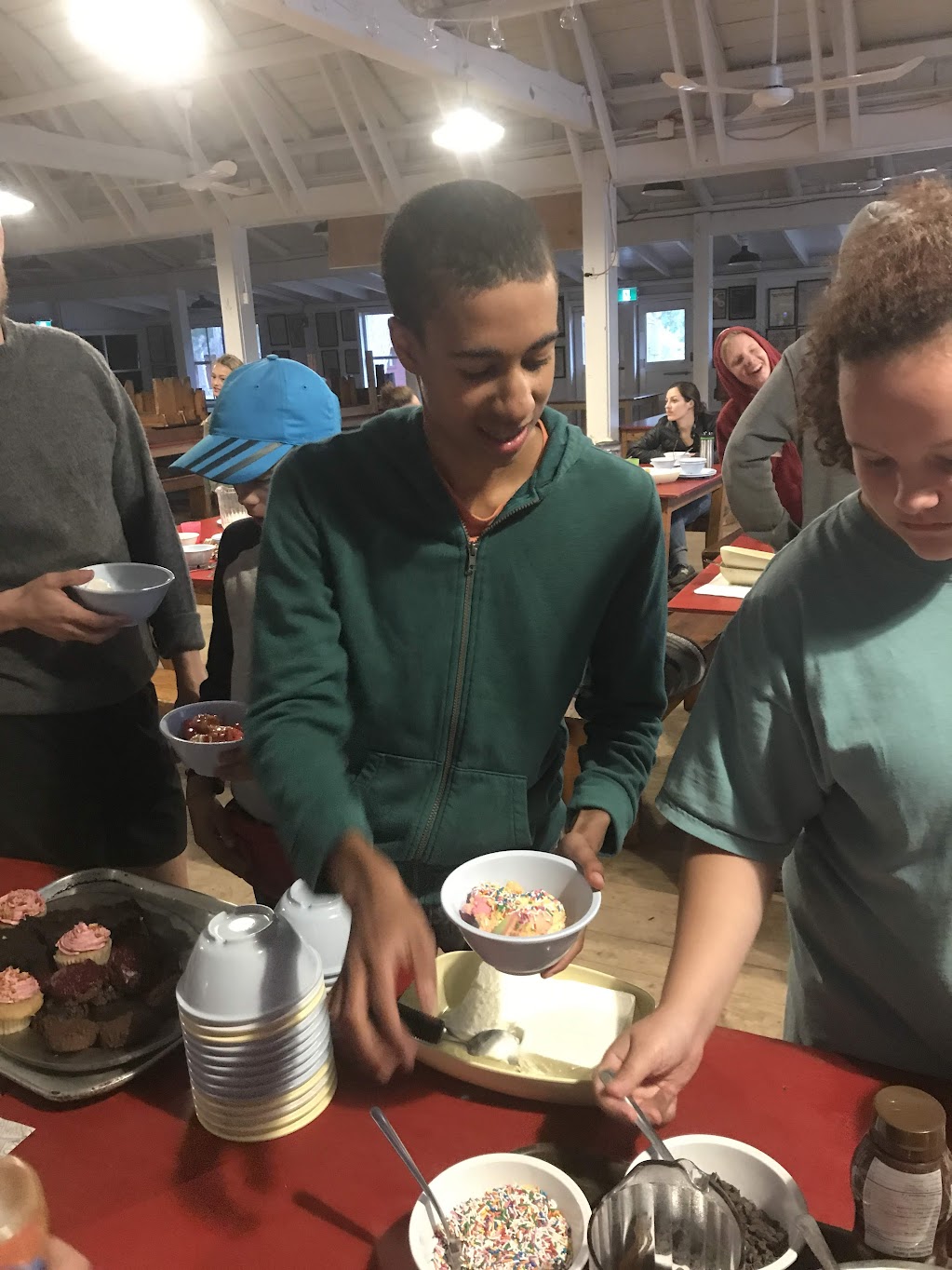 Monday - LUNCH: We are here at Red Pine Camp and had lunch which is the wrap chicken with salad of the pepper and tomato. DINNER: we had salad for supper with chicken and bacon. DESSERT: we had chocolate muffin. It was great food ever.

Tuesday - BREAKFAST: We had toast and oatmeal for breakfast. LUNCH: We had a salad and chicken. SUPPER We had salad and pasta and DESSERT: chocolate and with sesame.


Mindfulness and Yoga by Kiara 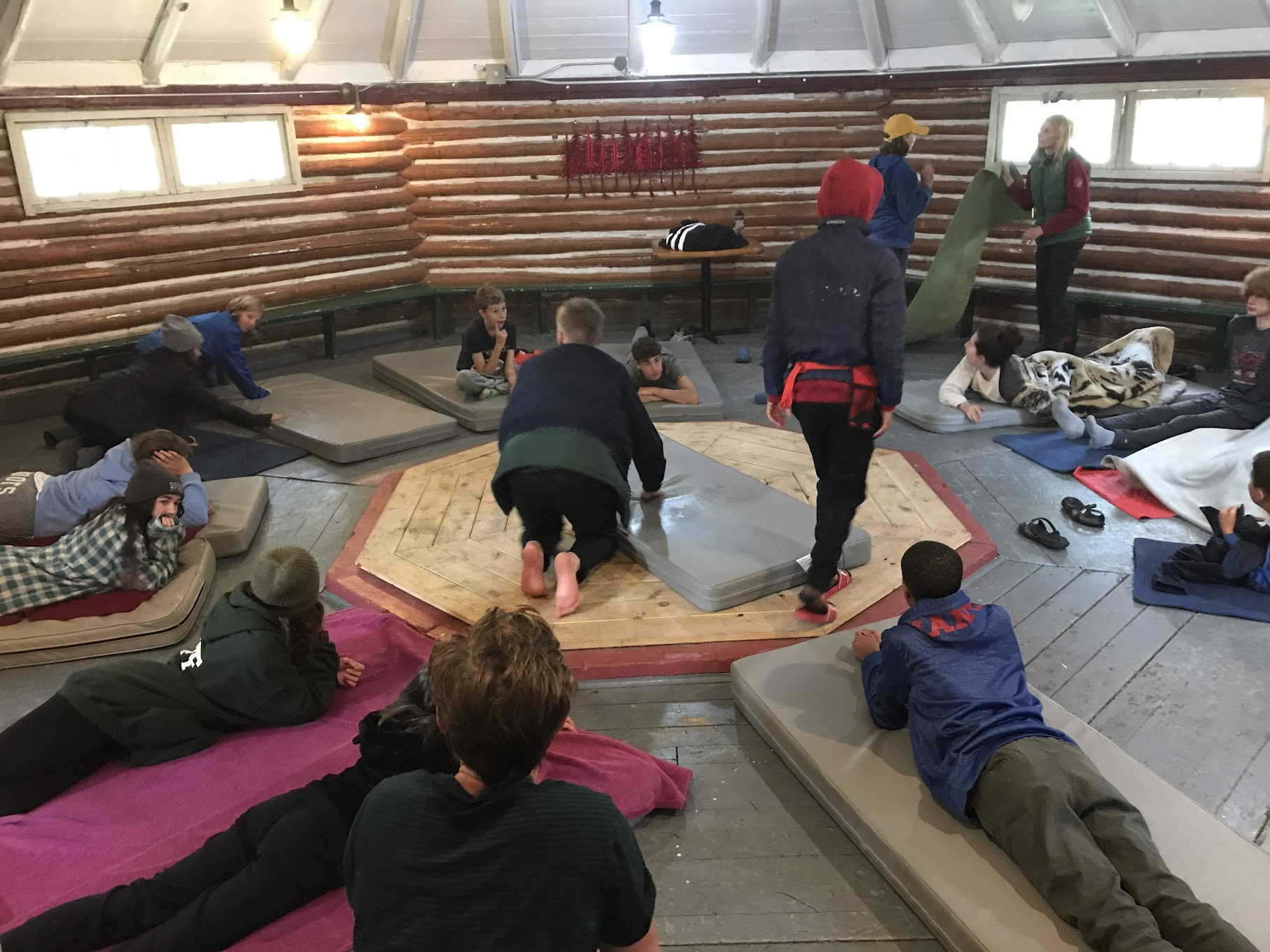 We did mindfulness and yoga twice at Red Pine, run by B and Karen. The first mindfulness session, we said the first word that would come to mind after Karen said something. The second one, Karen described life as a skyscraper, where at the bottom there’s a basement, and at the very top there’s a penthouse, and you get to choose where you go each day, however, sometimes people can send you up and down the elevator. Occasionally, people can join you in your basement, and wallow in your sadness with you, without really helping. It put a lot of things into perspective, and was really helpful when thinking of others.


Campfire and Drum Circle by Will 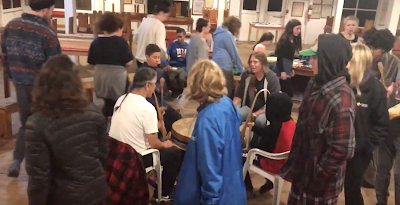 On Tuesday night Barry, Rob and Chloe came over to Red Pine
Camp from Pikwagnagan First Nation to do a drum circle with us. We set up the benches in a circle while they set up their Grandmother Drum. Barry explained that only males can play the grandmother drum because it’s their job is to provide spiritual life whilst the females provide physical life. We all participated in a smudging ceremony. After that Barry and Rob sang and played the drum while Thomas and Alex drummed alongside them. The learners that played the Grandmother Drum rotated from drumming to dancing. Everyone that wasn’t on the drum was either dancing or playing a hand drum or both. Now back to you in the studio Shauna to talk about your favourite song, “I have been lucky enough to participate in a dozen drum circles with Barry Sarazin and even visit his community for a Pow Wow. By now, Barry has learned that my favourite song is The Wolf Song and we make sure to end our drum circles with this crowd-pleaser. In Algonquin, Barry sings the song of the wolves in the forest and we dance around the Grandmother Drum, waiting for our cue to howl like wolves. This song always gets everyone up, moving, laughing and howling. I love it.” 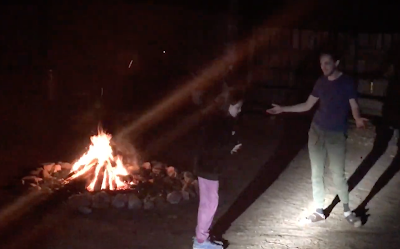 The last night we were there, there was nothing until Deagan said, “Let there be light!” and the fire roared to life. The first thing that happened was Norah had us do an activity where we looked for stuff we could see in the sparks. Then Deagan and Emi performed ”Aaron Burr, Sir” from the musical Hamilton when they were done Deagan and B sang “Down by the Bay” with the aide of all the learners. After the singing stopped, Thomas found a toad which he picked up to show us. Once the toad was safely returned, Kiara performed “The Martian Song” which is a repeat-after-me song, (which is a repeat-after-me song). Then, B lead us in an arctic-themed song and dance. When this was over Grace sang and guitared a song for us. Next we gathered close to the fire to do some acapella. Before we went back to our cabins to sleep, we said our favourite part of the trip and then recognized each other for things that happened over those four days.