- January 28, 2018
Blue Sky School has ruined my daughter; she will not be able to go to a traditional high school.

After just 90 days in the Blue Sky School setting, she is now too confident, too self-aware, too assertive,
and too mature to sit in a regular high school classroom.

She would annoy her high school teachers, respectfully questioning their statements and offering them
thoughtful feedback on their teaching.

She would frustrate the administration, firmly insisting that every single student has the right to
self-regulate and get centering time and physical activity in between every single class.

She would shut down the bullies and empower the quiet students.

She would be a disruptor. A changemaker. An advocate.

We took a chance on Blue Sky School because we were concerned a traditional high school experience
would harm our daughter. She is smart and talented, but also sensitive, moral and inquisitive.

Before she joined Blue Sky School, it could be hard to follow what she was trying to describe to you. You
could sense her mind going a million miles a minute as she attempted to simplify what she was seeing and thinking into concepts we would understand.

A few years ago, I labelled her “the philosopher child”. She is deeply reflective and introspective, and
cares intensely about our world and all people and all life in this world.

Over the past several years, we had a great deal of contact with medical system, as she struggled to
cope with the world around her. I became frustrated with “the system”, both the medical system and the education system, as the emphasis was on changing my daughter to fit the system.

This felt wrong. And as a parent, it was heartbreaking watching my vibrant, joyful child struggling. She
had so much potential, and the system was blocking it, no matter how hard we fought to mitigate this.

It will take time to break down all the anxiety and worries that overtook her over the eight years she spent
in the traditional school system. Blue Sky School customizes learning goals to the learner, and the
learner takes the lead in setting their priorities. My twelve year old daughter has consistently explicitly
stated that mastering her emotions is one of her goals. And at Blue Sky School, the coaches actively
support her in making progress in working through her fear.

It never occurred to me that this was possible -- that mental wellness could be an explicit target in her
daily learning, every single minute of every single day. After all, in a traditional classroom setting where
the day was structured to pack in math, English, French, science, social studies, physical education,
etc., there was simply no time to actively and continually engage on such a complex need.

But at Blue Sky School, it is more than possible. It's the norm.

What skills and knowledge does a person need, in order to thrive in adulthood? Whatever you think
of, I can confidently assure you --- my daughter is getting this, at Blue Sky School.

Looking for the Helpers - by coach B 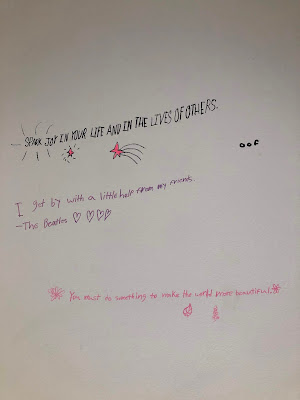 Back in my day, school bathrooms were not the most inspiring of places. I think back in horror to the foul and inconsiderate things my peers would do to vandalize the bathrooms. The ceilings of my elementary school bathroom were caked with wet toilet paper balls (think: giant spitballs) and the walls were scraped and littered with writing. It was so chaotic and messy, that I recall being scared to go to the bathroom alone. Thankfully, things look a little different in the bathroom stalls at Blue Sky School. Every teacher and parent cherishes a bathroom break, but for me, there’s something particularly special about being surrounded by the graffitied walls at Blue Sky. The bathroom walls, “vandalized” with positive, uplifting, and encouraging messages, are a daily reminder of the values and habits that Karen and Shauna, our co-founders, have instilled in our learners. These little stalls are a microcosm of the work Karen and Shauna have tirelessly put into creating a culture that cel
Read more